The Remarkable History of Air Conditioning 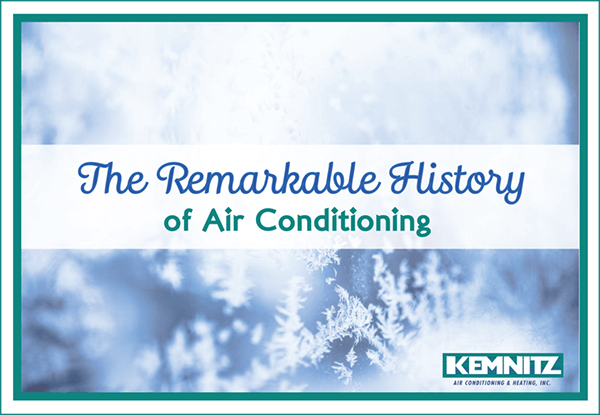 At one time considered a total luxury, today, the air conditioner is an essential appliance to our daily lives. So much that, almost half of the USA’s total energy consumption is a result of cooling and heating homes.

Modern day air conditioning is a product of a series of advancements of scientist looking to better the day to day lives of people. Read on to see how it all began.

Dr. John Gorrie was a physician and inventor from Florida, who lived in the 1800s. Gorrie proclaimed that by cooling cities you would alleviate “the evils of high temperatures.” He believed that this was key to preventing and reducing diseases such as Malaria and other common malaises. He was the first to implement a cooling system, yet his undeveloped system for cooling hospital rooms required ice to be shipped to Florida from frozen bodies of water in the Northern US. At this point, since shipping ice was expensive and impractical, Gorey started to experiment with the concept of artificial cooling by creating a machine that created ice using literal horse power (from a horse), water, and wind energy. He had his invention patented, but was unsuccessful at making his invention go main stream He did, however, open the doors to the modern day invention we call air conditioning.

It wasn’t until 1902 that the development of the air conditioner picked back up. William Carrier came to the rescue by accepting a job at the Buffalo Forge Company that would result in the very first modern day air conditioning. This job was unique to publishing and Carrier was tasked with the job to reduce humidity within the Sackett-Wilhelms Lithographing and Publishing Company, which was causing the magazine pages to wilt and wrinkle. After several experimentations, Carrier arrived at a solution using cooling coils that controlled humidity both ways—dehumidification (cooling water) and humidification (heating water) and utilized an automatic control system.

From there, the Carrier Engineering Corporation was created along with six other engineers.

In 1922, Carrier debuted a revolutionary type of system that used a centrifugal chiller, meaning it had fewer moving parts and compressor stages than existing cooling systems, greatly expanding the widespread use across the USA. Yet these systems were still too large for residential use, and in 1929 Frigidaire introduced the first split system cooling system. Advancements in cooling continued to develop until by the late 60’s pretty much every new home was equipped with central air. There continues to be continuous advancement in the cooling industry, with new, more energy efficient solutions constantly changing the residential cooling landscape.

At Kemnitz, we’ve been helping the residents of Irvine stay cool and comfortable for over 25 years. If you’d like to learn more about your home’s cooling system and pick up some smart HVAC tips and tricks along the way, be sure to connect with us on Facebook and Twitter.